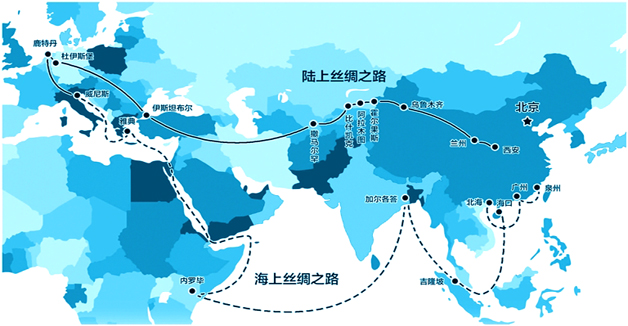 Since ancient times, the silkworm silk produced in our country has been deeply loved by people along the silk road.To this day, some countries along the silk road still have the tradition of silkworm production, and the local people have a strong desire to develop silkworm cocoon and silk industry.

"One Belt" is an extension of the ancient silk road in our country, mainly in the land, covering areas including Europe, central Asia, South Asia and the Indian Ocean and other regions, four southwest provinces and the northwest five provinces in China's economic development have played an important role.

"One Road" is the expansion of the Ming dynasty famous navigator Zheng He's voyage in China, in China's southeast coast as a starting point, across the seas, connection, the Arabian peninsula, South Asia, Africa, Europe and other regions.

"One Belt and One Road" strategy is the center of the development of international trade cooperation, it not only be no threat to the existing cooperation mechanisms, and but also through a wide range of regional economic cooperation or resources complementary advantages, will bring new connotation and energy to all countries along the way, forms the good situation of mutual benefit.The implementation of the strategy of "One Belt and One Road ", not only can facilitate development cooperation actively between the nationals and regionals all the way along, But also create a leading industry in our country market, loose environment for the development of China's export trade and inject new vitality, promote the development of China's export trade.

As "One Belt and One Road" strategy to be further promoted and deepened, the asia-europe transport network will enlarge radiation by a wider range, more convenient transportation, promote the speed of logistics at the same time, greatly reduces the logistics cost, to deepen trade between our country and all other countries along the route.

In terms of trade structure,the complementarity in the bilateral trade will be enhanced ,It is conducive to a new international economic and trade cooperation mode, improve our export growth, form mutually beneficial win-win situation, bring huge benefits to the development of China's export trade and economy.

Affected by the financial crisis and the European debt crisis, the silk carpet international market has been depressed.

Because the silk carpet industry of china and industries of other countries along the route have obviously complementarity , the domestic pressure of competition, and silk rug under the influence of problem such as technical bottlenecks, through a new silk road network, in the foreseeable driving along the country's economic development, can promote their consumer demand to China's silk rug, so that advantage spreading manual products, and strengthen industry contacts with "neighbourhood" and all the countries and regions along One Belt One Road route, learning the advanced technology from the developed countries.

Put efforts to improve the production and cultural standards of China's silk carpet.

China will shift from the   country to the strong country for its silk carpet production.

Both opportunities and challenges exist side by side. In a word, through continuous renovation and update, China's silk carpet will become an example of Chinese manufacturing.